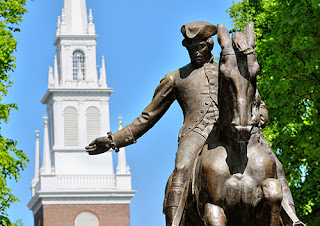 Although seeing your local dentist for your regular cleanings and exams may yet be just another routine to fit into your hectic life, there are many historical figures, past and present, that have achieved acclaim and celebrity coming from a profession that is not typically associated with such regard! Take a look...

Perhaps most famous for his gun at the O.K. Coral alongside his buddy, Wyatt Earp, but "Doc" also had a day job as a dentist.  He was trained in Pennsylvania and later opened a thriving dental practice near Atlanta.  He had to close his dental practice and move west due to an illness, and we all know the rest of the story!

Known around the world as a champion swimmer, Spitz was actually accepted into dental school before he became an Olympic gold medalist.  While he ultimately decided not to attend school in favor of pursuing his swimming career, he successfully amassed seven gold medals!

The most famous dentist to come out of the American Revolution.  Besides being known for warning the colonies of the impending British troops attack, he was also a silversmith and a dentist. More specifically, he specialized in making false teeth for people in need!

The most famous band leader of Johnny Carson's The Tonight Show Band, was nicknamed "Doc" because his father was a dentist. Although "Carl" was not a dentist, his father, Dr. Severinsen, DDS, was credited for allowing his son to become the accomplished trumpet player that he became.  For the younger generation that may not know, The Tonight Show, is the same show that is currently hosted by Jimmy Fallen!

Yet another famous musician that had a dentist for a father.  Dr. Davis, Sr. had a thriving dental practice that financially supported his son's musical aspirations, allowing Miles Davis, Jr. to become one of the most acclaimed and influential jazz musicians of all times!

Although our team may not have any celebrity connections, our desire is to treat each patient in a caring manner that provides you excellent care!